This Blog is for all English speaking female friends who would like to express theirs thoughts, tales, personal experiences, anything that speaks of themselves.

Like Shahrazād… to tell stories, to tell our story.

In the last few weeks, we have been experiencing isolation in our home. The day has an unfamiliar rhythm. Space and time, now, have a different meaning, they are like a limbo we had never ventured in.

Maybe, at times, we might have slightly touched this sort of suspension, or even got to know it, always restricted though to single episodes, geographically limited; nothing to do with the current situation which is global.

We know Space and Time, entities which run on the linear timeline of human history; they are in the cycle of the seasons, in the life that is born, dies and is born again. They can be perceived in a comprehensive vision, along the timeline were we can read the civilization of people, the history of the countries during the millennia.

Everything now flows endlessly and indefinite in the silence of the world, which has stopped, the suspended earth and the waiting for the raise of the noise, the good one, the one that tells the story of us being present to the narration of each one, amongst hugs, words, meetings, busyness.

We could take advantage of this historic moment as an opportunity for an attentive dialogue between us, the world and eternity, to transform the absence of the sound, perceived over our windows, in an idea of spatial silence, where our slow bodies could spin our words, taking the shape of narration.

… and in an almost prenatal progression -- a paradoxical oxymoron -- in which we can mend the dialogue with the whole universe, while rediscovering our own identity.

This wants to be the space where to file your voices, with a return in concentric circles. A room where the rainbow always arises again, as soon as we start listening with deep attention through the act of writing.

I am Marina Agostinacchio, teacher of Letters of a school in Padua, the city where I was born in 1957. I have written poetry that I have published since 2002. I think that writing, in all its expressive forms, is a possibility of love and redemption for humanity 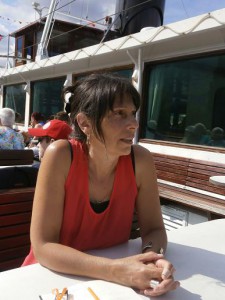 Post below your thought and send it, then go to “Published Post” to read it.
If you want that your name appears, please insert it below your article, otherwise your post will stay anonymous.

This website uses cookies to improve your experience while you navigate through the website. Out of these, the cookies that are categorized as necessary are stored on your browser as they are essential for the working of basic functionalities of the website. We also use third-party cookies that help us analyze and understand how you use this website. These cookies will be stored in your browser only with your consent. You also have the option to opt-out of these cookies. But opting out of some of these cookies may affect your browsing experience.
Necessary Sempre abilitato
Necessary cookies are absolutely essential for the website to function properly. This category only includes cookies that ensures basic functionalities and security features of the website. These cookies do not store any personal information.
Non-necessary
Any cookies that may not be particularly necessary for the website to function and is used specifically to collect user personal data via analytics, ads, other embedded contents are termed as non-necessary cookies. It is mandatory to procure user consent prior to running these cookies on your website.
ACCETTA E SALVA